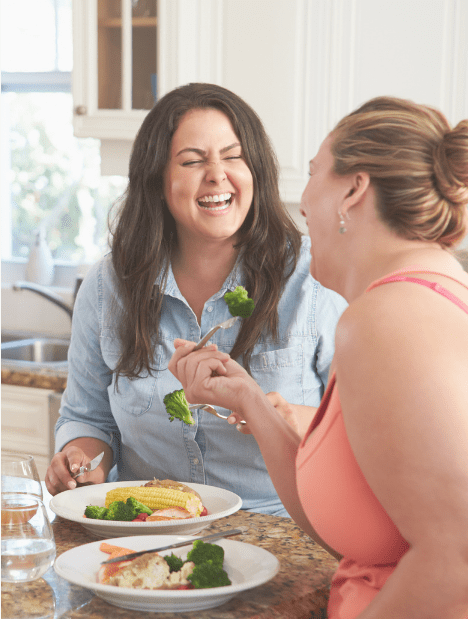 If you’re ready to feel HEALTHY and HAPPY, start eating normally and settle into a weight that’s natural and comfortable for your individual body, all while working with an understanding, supportive, and knowledgable coach, you’re in the right place.

During the initial session, we will do a full assessment to get to know you and your individual needs, and welcome any questions you may have about our work together. With your permission (and depending on your comfort level), we will start to explore your past and present relationship with food, body image, your health history, and so much more.

Together, we will discuss the type of support you need, both short- and long-term goals, and what you are hoping to get out of our work together.

Follow-up treatment is highly personalized. We will review eating patterns and behaviors since the previous visit and identify areas to work on. Sessions may include review of food diaries and intake, weight, adjustment of menu plans, and continued goal setting.

Meal Support therapy provides clients with a safe and encouraging environment to address and process emotional reactions to food.

Some of the issues addressed will include:

We understand how overwhelming it can be to plan, prepare and shop for balanced meals. We will discuss shopping for groceries, teach you how to read food labels and prepare simple meals.

You can also check out our newest cookbook Recipes for Recovery: Food Freedom from Eating Disorders and Disordered Eating for sample meal ideas.

If you’re ready to feel HEALTHY and HAPPY, start eating normally and settle into a weight that’s natural and comfortable for your individual body, all while working with an understanding, supportive, and knowledgable coach, you’re in the right place.

LEARN MORE ABOUT OUR SERVICES

What is an Eating Disorder?

According to the National Institute of Mental Health:

“Eating disorders are serious, biologically influenced medical illnesses marked by severe disturbances to one’s eating behaviors. Although many people think about their health, weight, or appearance from time to time, some people become fixated/obsessed with weight loss, body weight or shape, and controlling their food intake. These may be signs of an eating disorder.”

There is a common misconception that eating disorders are a choice and that only thin, white teenagers develop eating disorders. Unfortunately, the media often perpetuates this stereotype, but nothing could be farther from the truth!

Eating disorders are not a choice, and do not have “one” look.

Eating Disorders are capable of affecting any person at any age, racial/ethnic background, body weight, and gender.

Although eating disorders often appear during the teen years or young adulthood, they may also develop during childhood or later in life (40 years and older).

How is Disordered Eating Different from an Eating Disorder?

Disordered eating sits on a spectrum between “normal eating” and an eating disorder and may include symptoms and behaviors of eating disorders, but to a lesser degree of severity.

Disordered eating may include restrictive eating and skipping meals, compulsive or binge eating, avoiding a particular type of food (i.e., like carbohydrates,) labeling foods as good or bad, using diet pills or other forms of purging, and/or inflexible eating patterns.

Dieting is one of the most common forms of disordered eating.

Unfortunately, disordered eating is very common because dieting and the pursuit of thinness is normalized in Western culture. I don’t know anyone who has not worried about their weight or body image! Do you?

In a nutshell, the difference between disordered eating and an eating disorder boils down to a few factors:

Disordered eating and diagnosable eating disorder behaviors exist along a continuum, and there can often be a fine line separating one from the other.

Both will usually develop as an ineffective way of managing uncomfortable feelings.

Both can cause distress and may require outside help in the form of therapy, nutrition therapy and/or medical monitoring for a person to fully heal.

Both deserve attention and treatment!

How do I know if I have an eating disorder?

Common signs of an eating disorder, whether for yourself or your child or loved one include a preoccupation with weight loss (and the scale), food and body image.

Sometimes “wanting to get healthy” can be a catalyst.

If you recognize any of these common signs in yourself or a loved one, reach out for help. If you are unsure if you could have an eating disorder, consider taking this short Eating Disorder Screening from the National Eating Disorder Association (NEDA).

How do I know if my child or teen has an eating disorder?

The telltale signs of an eating disorder can often be hidden in plain sight with our kids!  That’s because we see our kids on a daily basis so small changes in their food and activity patterns can be easily missed. Here are some important red flags that are unique to our kids and teens.

These are some possible signs that your child is struggling with their food and/or body image but it does not include every possible scenario. Do not be afraid to talk to your child and seek help from a medical professional, such as your pediatrician.  Early diagnosis and treatment are essential in helping your child to fully recover.

What is the difference between Overeating, Emotional Eating, and Binge Eating Disorder?

Overeating: Enjoying a delicious meal is one of life’s simple pleasures. Sometimes that restaurant or holiday meal tastes so good, it’s hard to stop eating, even if you’re feeling full. This is “overeating” and it doesn’t usually trigger feelings of guilt or shame. Overeating exists along a continuum of what we consider “normal” eating.

Emotional Eating: Emotional eating is eating for reasons beyond physical hunger. For example, drowning our sorrows in ice cream after a tough break-up, or eating popcorn mindlessly on the sofa because we are bored.

While this list is not exhaustive of all the questions that people have about eating disorders, it covers the most often asked questions we get as dietitians who specialize working with clients who have eating disorders, disordered eating and are in recovery as well. The most important thing to remember is that people can recover and learn to make peace with food and their body image.

If you need help or have more questions, please reach out.

Start by booking a call with Erica, our practice owner, and she will talk with your to determine the best dietitian on our team to work with you. And remember, you are not alone. Eating disorders can affect anyone, the best step is to get help as you heal.

Click here for more information about our appointment policies 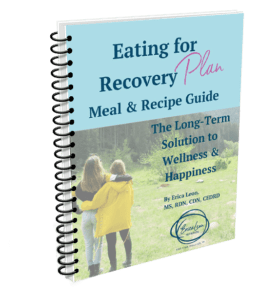 Enter your name and email below to download this free guide.