“Dieting (in the name of diet culture) makes your brain think it’s starving itself, and so your body, survival mode kicking in, has no choice but to binge-eat. Enter the diet-binge-diet cycle.” 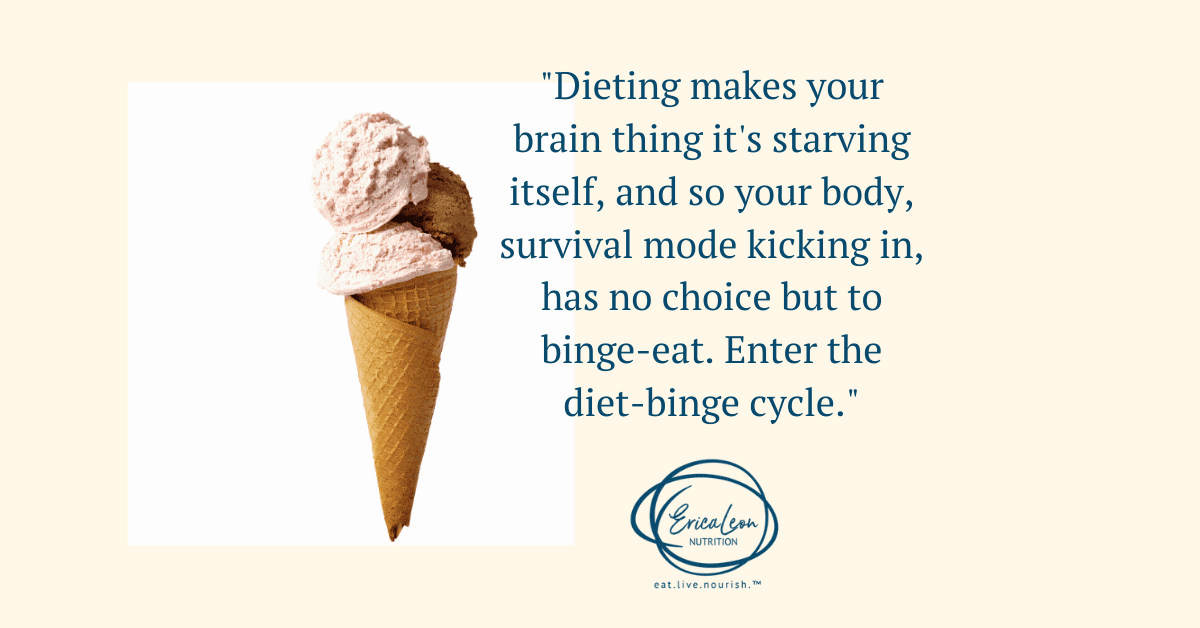 In the landmark book,  Intuitive Eating, the authors present ten principles which are designed to help you break free from diet culture. The very first principle is to

“Throw out the diet books and magazine articles that offer you false hope of losing weight quickly, easily, and permanently. Get angry at the lies that have led you to feel as if you were a failure every time a new diet stopped working and you gained back all the weight. If you allow even one small hope to linger that a new and better diet might be lurking around the corner, it will prevent you from being free to rediscover Intuitive Eating.”

“This principle is insanely difficult”, according to Ashley Seruya, BS, a social work student, eating disorder survivor (and my amazing administrative assistant), “and you may be working through it throughout your entire intuitive eating journey.

I think the suggestion of getting angry is super helpful, especially when we begin to understand that our behaviors are a product of an oppressive society that shames fatness and pressures women to restrict their intake to look a certain way. For me, Naomi Wolf’s quote, “A culture fixated on female thinness is not an obsession about female beauty, but an obsession about female obedience. Dieting is the most potent political sedative in women’s history; a quietly mad population is a tractable one,” was eye opening.

Dieting and my need to be smaller (i.e. my eating disorder) was rooted in a lot of things, but one of those things was so much bigger than myself, and therefore I couldn’t blame myself for what I had done. But I could do something different moving forward, and that is what we are all trying to do. So — reject the diet mentality, clear your social media feed of diet talk, recognize diet culture all around and speak up when you notice it, and be vigilant against it. During this month especially, we can feel up to our eyes in diet talk, but do your best to reframe things for yourself, even when diets and behaviors become tempting. Remember why you decided to pursue recovery or intuitive eating… because diets and eating disorders don’t work. They keep you trapped and miserable, and no one deserves that.”

I (Erica) used to put people on diets — that’s what dietitians were trained to do. I quickly learned that this approach was not working when the same clients came back over and over to “fine tune” their diets. They just couldn’t understand what they were doing wrong!

They were not doing anything wrong. It was the diets that were the problem. We know the physiology of dieting much better now. Diets make you feel like a caged animal. Dieting makes your brain think it’s starving itself, and so your body, survival mode kicking in, has no choice but to binge-eat. Enter the diet-binge cycle, along with disordered eating and, for some, full-blown eating disorders.

The common denominator is a diet. It’s time to stop pushing diets on everyone, and start promoting self-love and self-acceptance of our bodies, no matter what their size or shape. This is how I discovered intuitive eating.

What do you think of the first principle? Come join us in Erica Leon’s Free Support Group to discuss!

NOTE: You can read more about rejecting the diet mentality with this article, How to Be Anti-Diet in a Diet Culture World 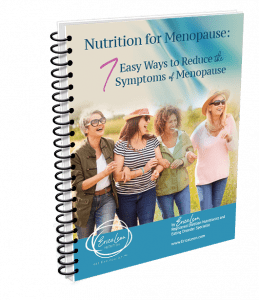 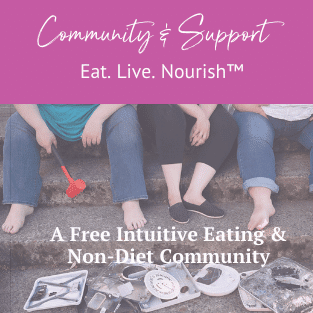